Each answer is final, so choose carefully! Refresh the page to restart the quiz.

This is a favourite question of Helipaddy because it hasn’t really been answered that we know of.  Humans are known to struggle in IMC but can successfully fly on instruments alone with a bit of training.  Birds have their compass embedded inside their brains and seem to be able to navigate in IMC to some degree.  It is well known that most birds also use ground references for accurate navigation so they would have to manage without these.   The answer is yes they can but they tend to not want to.   Without instruments, Humans are very susceptible to a case of The Leans.  Because of the rapid stabilisation of the fluid in the ear canals, a pilot may perceive straight and level flight while actually in a banked turn.  There is no perceivable difference with the eyes shut and thus it is impossible to stay straight and level without visual references or instruments.

#2. Would a helicopter take off on the moon?

Gravity on the moon is 1.6m/s/s (Earth is 10) so that’s great for flying machines.  However, the moon has a total of 25 tonnes of air on the whole planet!  This is more or less nothing so it is impossible for helicopter engines to function unless they carried their own air to mix with the fuel.  Unfortunately, even such a helicopter would not be able to fly as the rotor blades would not have any air to work against.  Helipaddy landing sites on the moon are therefore zilch.

Air density on Earth is 1.2 kg/m3.  Visualise a cubic meter of air in front of you that has a surprisingly huge mass of more than a bag of sugar.  Next time you fly through a windy valley, that’s probably several million tonnes of air sloshing about – it’s pretty heavy stuff.

#3. What is the highest number of main rotor blades of any operational helicopter?

Slight catch question because a chinook has two rotors each with three blades, so people may say 6.  However, the appallingly named The Sikorsky CH-53E Super Stallion has 7 blades.

But… the Mil Mi-26, a Russian heavy transport helicopter, and the largest and most powerful helicopter to have ever gone into serial production, wins with EIGHT blades.

It’s notable that the highest theoretical lifting efficiency is achieved with the fewest blades and experiments have been done with single-blade rotors (with a counterweight – there were vibration problems that couldn’t be resolved).

So in practical terms, the most lift for the least power is achieved with a 2 blade rotor, but the need to absorb more power with a limited desirable disc diameter forces you to add more blades (or you may want a smaller rotor with lots of blades for manoeuvrability or other reasons, but it’s sub-optimal from a horsepower efficiency standpoint).

We don’t count the prototype with 20 blades – the Pescara Model 3 Helicopter.

#4. Which is the only instrument that requires both the pitot tube and the static port?

Airspeed.  So a faulty airspeed reading could be due to either device – more on this in our blog article here.

#5. At what point, during flight, is the airflow through the disc neither upward nor downward?

During autorotation, airflow is upwards and the aircraft is being slowed down by the air mass.  During powered flight, airflow is downwards.  So just at the point when transitioning into an autorotation, you will be in between the two for a brief moment.

During powered flight, in vortex ring conditions, the airflow will be down through the main rotor disc but will sweep around and mess with the clean air.  Pilots are taught the Vuichard recovery technique to avoid this.

#6. The LOW FUEL test panel light has a delay - what is the reason?

To give the fuel a chance to settle in the tank.  If the fuel had sloshed over and above the fuel sensor just at the point of pressing the button, then it might not detect low fuel.

If the fuel light comes in immediately during the test, it indicates a fault.

#7. The four forces acting on a helicopter in flight are:

Profile drag develops from the frictional resistance of the blades passing through the air. It does not change significantly with the airfoil’s AOA but increases moderately when airspeed increases. Profile drag is composed of form drag and skin friction (from the paint). Form drag results from the turbulent wake caused by the separation of airflow from the surface of a structure.

Induced drag is generated by the airflow circulation around the rotor blade as it creates lift. The high-pressure area beneath the blade joins the low-pressure area above the blade at the trailing edge and at the rotor tips. This causes a spiral, or vortex, which trails behind each blade whenever lift is being produced. These vortices deflect the airstream downward in the vicinity of the blade, creating an increase in downwash. The component of lift that is acting in a rearward direction is induced drag.

Parasitic drag is caused by non-lifting components of the helicopter, such as the cabin, rotor mast, tail, and landing gear. Any loss of momentum by the airstream, due to such things as openings for engine cooling, creates additional parasitic drag.

The answer is A, drag is one of the forces.

#8. What is the most aerodynamic nose shape for a helicopter?

The droplet shape is the best for lowish speeds of helicopters. For transonic and supersonic the best shape is the sears-Haack body, like a nose cone. At low speeds, the shape of a tear minimizes the detachment of the flow from the surface that would generate drag due to turbulence. Flow detachment is caused by a condition called “adverse pressure gradient”.

So the droplet is the shape that minimizes this adverse pressure gradient.

The Hughes Model 369 had a distinctive teardrop-shaped fuselage that had strong crashworthiness properties and provided excellent external visibility. Customer preference and other design constraints ultimately led manufacturers to eschew the shape for one less aerodynamically efficient.

#9. In a modern turbine engine, how much of the airflow is used for cooling the engine versus used for combustion?

The burning process in a gas turbine engine is continuous, and nearly all of the cooling air must be passed through the inside of the engine. If only enough air were admitted to the engine to provide an ideal (stoichiometric) air/fuel ratio of 15:1, internal temperatures would increase to more than 2,000 °C. In practice, a large amount of air in excess of the ideal ratio is admitted to the engine. The large surplus of air cools the hot sections of the engine to acceptable temperatures ranging from 800° to 1,200 °C.

With thanks to Simon at Rolls Royce who helped with the answer to this question.

#10. In the US, what is the maximum horizontal distance between aircraft for it to be a formation?

1nm in the US and 0.5 NM horizontally in Europe, and 100 ft vertically in both

The largest-ever formation of helis was a Russian group of 25 Robinson helicopters.  The stunt was led by active Helipaddy member Evgeny Kabanov. 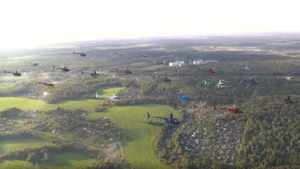 Wow, you are truly a Helipaddy Supremo!

Show everyone you’re a heli expert! Share your Helipaddy 2022 Wrapped Quiz results with your friends below.

END_OF_DOCUMENT_TOKEN_TO_BE_REPLACED

Have a question about Helipaddy?
See our FAQs for more information.